The Gatornationals… Sportsman only

The Gatornationals were postponed for the first time in its history, this is the 51st annual race. Although the race was postponed for the Pro’s, the sportsman were able to complete their race, another first in the history of NHRA. As everyone is aware of the the Covid19 spreading across the country, NHRA made the right move. The sportsman would have no fans as NHRA limited the track to racers and crew, there would be no spectators. Racing was completed in two days, a very somber day for the finals, but well understood by all. 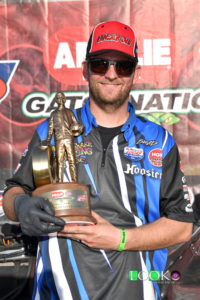 Neither driver qualified at the top, but both drivers did what that needed to do to get to the finals. Leopold was clean through the rounds, but was a little down on performance to Plourd. Leopold had the better light, .026 to Plourd’s .059, but Plourd had then better car and to the win. This is 21st NHRA national event win. 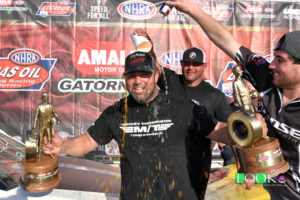 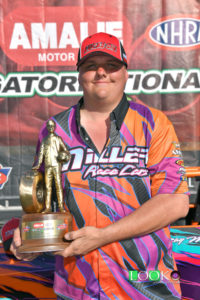 Miller takes on Moses, Miller is .007 on the tree and .005 over the index… a 12 pack that gave Moses no room to get in on. Miller takes the stripe and the win. This is Miller’s 18th NHRA national event win. 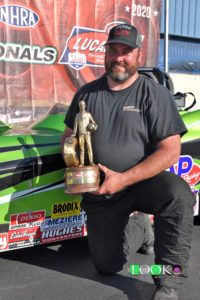 Slack and Anderson on both good on the tree, Slack takes to much stripe and breaks out by .016. Anderson is good with 9.91  on a 9.90. Anderson picks up his 5th NHRA national event win. 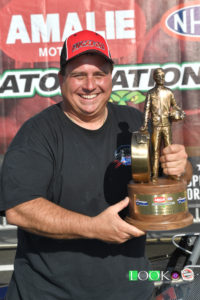 Bertozzi is trying to get one win in the two finals he has been in. Laris is .013 on the tree and .004 over his dial. The math is just not there for Betozzi,  Laris takes the stripe and the win, this is his 3rd NHRA national event win. 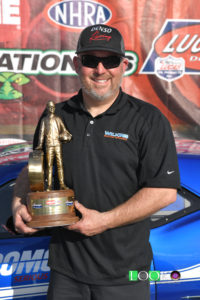 Photos By – Look at Drag Racing